This is going to be difficult for me to write about. I generally don’t like people to worry about me. Maybe I feel like I’m actually a burden, or that others just have better things to do with their lives then add more stress from thinking about one person’s issues. My thinking is that writing this out will explain a lot of things to anyone reading this (including myself).

For the past few weeks, I have had the worst time trying to sleep. I generally need 7-8 hours every night to function properly and I haven’t been getting anywhere close to that. My job demands a high level of attention to detail, and if I’m not completely rested, bad things happen. We’ll get to the disaster that was last Friday shortly. But first, let’s talk about my atrocious sleeping habits.

I have a Fitbit Charge HR that tracks practically everything, including heart rate (the HR part of the name) and subsequently sleep! I usually don’t make an effort to wear the Fitbit to bed because I just didn’t care. But once I realized I wasn’t really sleeping, I decided I wanted to know just how much sleep I wasn’t getting. And oh boy, are the results startling. 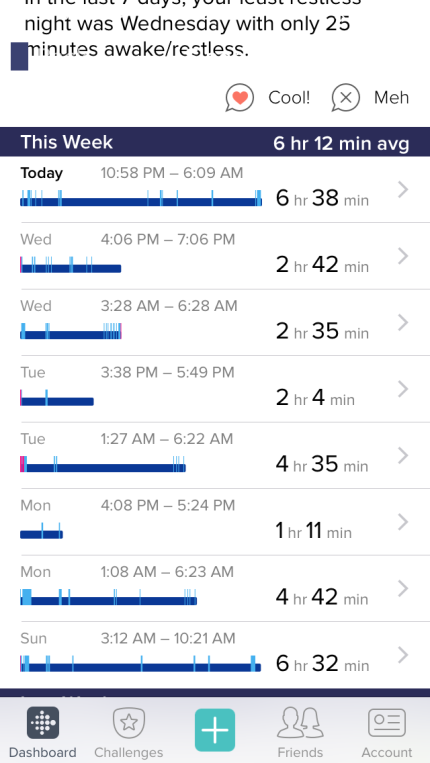 This is a screenshot of what the Fitbit app has tracked of my sleep this past week. As you can see, it’s pretty terrible. My daily average in hours slept is only at 6 hrs and 12 mins and that’s only because I sleep twice a day. The past three days each have two separate entries because I tend to take a nap after work. I have to or anything I have to do in the evening won’t happen.

The little light blue lines that appear throughout the darker blue bars are when I was ‘restless’ while sleeping. The red that appears a couple times in the beginning of a few days are when I was awake. I’m restless quite a bit because I’ve been having strange dreams which are more like nightmares. Two weeks ago, they started out as the classic nightmares: fear of falling, teeth falling out (seriously), and being lost somewhere. Then they started to get more specific, the ones that I can remember. Friends would die and I would be helpless to do anything, I would be permanently dismissed from the acting studio I’m a part of, and being fired from my job, to start.

Apparently, the key for me is to get to bed on time and then not let anything distract me (i.e. my phone, a book, scripts) from falling asleep. Also, apparently I need to wear socks to bed? A friend suggested it so I tried it last night and it seems to have worked. Whatever works, right?

Last Friday at work was a disaster primarily because I had to spend way too much time correcting things I did on Thursday. It’s hard to even write in words what went down because I keep cringing at what happened. But the lesson is slowly being learned: sleep is absolutely necessary to do a good job.

Tonight will not be a night I go to bed on time. I have an acting class that goes right up to 10pm, so that’s shot. But the weekend is almost here! And then Monday begins a new week. Sleep is on the agenda.